GENERAL GHSA INFORMATION FOR THE
​2020  FASTPITCH AND SLOWPITCH SEASONS 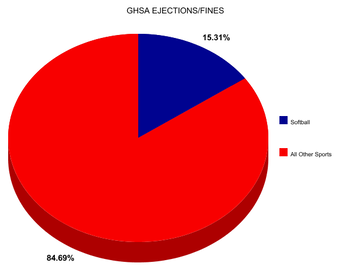 By Todd Holcomb of the AJC
​
The Georgia High School Association has disqualified or ejected 536 athletes or coaches during competitions through Jan. 18 of the current academic year and fined schools $20,500 for that misconduct, the association revealed Friday.  The GHSA has collected another $90,000 in fines from schools whose coaches failed to complete mandatory coaching or rules clinics. In addition, GHSA schools have paid $38,750 in fines for more serious misconduct such as illegal practices and recruiting.

All told, the GHSA has levied $149,250 in fines, and the academic year is only halfway done. Statistics like these always have been public information, but this marks the first time that the GHSA has compiled and released them so extensively on its own.
“Sportsmanship has been a common theme for us, and we began to talk last year about seriously addressing the problem of excessive fines and unsporting events,’’ GHSA executive director Robin Hines stated in the association’s newsletter released Friday. “It is important that all stakeholders are aware of the problem so the problem can be addressed.’’

The most ejections and disqualifications have occurred in football, with 243, but basketball is gaining. Through Jan. 17, there had been 233 ejections in that sport – 142 from boys teams, 91 for girls teams. Other sports with ejections or disqualifications were slow-pitch softball (29), wrestling (27), volleyball (three) and swimming and diving (one). None were reported for cross country or competitive cheerleading. Many sports, including baseball, soccer and track and field, don’t begin until February.

More than 300 of the 536 ejections entailed fighting or leaving the bench area during fights. Other offenses that drew ejections included profanity, disrespect of officials, multiple technical fouls or unsportsmanlike-conduct penalties, flagrant fouls and throwing punches or kicks. There was one instance of a wrestler being disqualified for biting an opponent.
Many of the ejections have occurred during single contests. On Jan. 18, a girls basketball game between Thomasville and Thomas County Central resulted in 23 disqualifications for fighting or leaving the bench during a fight.
On Nov. 13, Carver-Atlanta and Therrell had 25 players disqualified for the same offenses in a boys game. On Dec. 7, Jonesboro and Riverdale lost 18 players during a girls game. Salem lost 11 players in a football game Sept. 27 for fighting.

The failure to complete rules clinics, though not a sportsmanship issue, is another big source of fines. Most rules tests can be completed online in less than two hours. Yet the GHSA has levied 900 fines of $100 apiece for coaches who did not comply.
The biggest fines are levied at schools for major infractions.

Islands, a Savannah-area school forced to forfeit four victories last fall for violating the GHSA’s undue influence and recruiting bylaws, was assessed five fines totaling $5,250 for misrepresenting facts during a GHSA investigation, allowing an illegal transfer student to participate and failure to exert institutional control.
​
East Hall and Northeast-Macon were fined between $1,250 and $1,500 for unsporting behavior involving their football teams in separate incidents last fall. On Nov. 25, Greenforest Christian was fined $1,000 for allowing an ineligible student to try out, practice or compete for boys basketball. The DeKalb County private school forfeited four basketball games this season.
The GHSA plans to release a year-end report in June. Hines hopes compiling and publishing the information will serve as a deterrent. The GHSA’s report doesn’t identify the students or coaches who were cited for violates.
“It is our hope that this will inform our schools’ administration, coaches and students of their performance in these areas and serve as a reminder to insure all staff to be proactive and eliminate violations and fines altogether,’’ Hines said.

We will cover issues pertinent to softball including, but not limited to, game issues, rule interpretations, etc.  This issue will cover items of importance.

ARTIFICIAL NOISE MAKERS (Spectators): During outdoor events artificial noise makers are permitted as long as they do not conflict with any timing/sounding device used by game officials.  As such, during softball games they are permitted to be used by spectators as long as they are not deemed to have a negative impact on the administration of the game.

PROFESSIONALISM/DRESSING: Year after year GHSA informs umpires they are not to dress/change for games in the public parking lot.  Host schools are required to provide a location for the umpires to dress.  WHEN YOU ARRIVE AT THE GAME SITE ASK.  We just had a situation where an umpire not only dressed in the public lot but also decided to relieve himself.  When he did so, students and teachers at the adjacent middle school witnessed it and also took pictures.  This action by the umpire is clearly not only unprofessional but also an embarrassment to GHSA. Acts of this nature will be dealt with in a severe manner.


​COMPLETE GAME: All regular season Varsity games must be played until a winner is determined.  This means the game MUST be (7) innings unless shortened due to weather, run rule, darkness, etc.  The first game of a Varsity double-header cannot be shortened by coaches’ agreement or unilateral umpire decision.  The game must go seven (7) innings.  If the game is suspended with the scored tied, and cannot be finished on the same day, the game shall be resumed and completed at the next available date for both schools.

This is the Third in a series of 2019 season weekly softball umpire bulletins.  We will cover issues pertinent to softball including, but not limited to, game issues, rule interpretations, etc.  This issue will cover items of importance.

JEWELRY: Rule 3-2-12 prohibits players from wearing any type of jewelry, including cloth and string types.  Umpires have been seen allowing players to wear cloth friendship bracelets.  This is considered jewelry and cannot be worn.  It is your job to enforce the rule as written.  There is nothing in the jewelry rule open to interpretation. The rule is clear – NO JEWELRY OF ANY TYPE.  The only exceptions are religious medals and medical alert medals, both of which must be taped.  You cannot wear tape over earrings.  The earring must be removed or the player cannot play.

RESTRICTION TO DUGOUT: Umpires should use this penalty instead of ejection when possible.  However, if ejection is warranted use it.  When a coach is restricted to the dugout he cannot be on the field nor make defensive visits.  He can still coach his team.  He can tell players where to position, call pitches, etc.  Recently an umpire admonished a coach he restricted to the dugout and threatened to remove him because he was still coaching his team from the dugout.  This umpire was incorrect in keeping the coach from coaching the team.

September is “Cancer Awareness Month” for fall sports in the Georgia High School Association to increase attention and help fight all types of this dreaded disease.  Teams may wear colored jerseys, socks, wristbands, and/or headbands during a home game to show support for their chosen fundraiser.  For instance, in observance of Breast Cancer (Pink), Childhood Cancer (Gold) and Prostate Cancer (Blue) at hosted events during the September schedule.  January (winter) and April (spring) are also “cancer awareness” months later in the scholastic season.

Thank you to everyone in advance for your enthusiasm and action to fight back against cancer.  Here are some groups that can support your much appreciated efforts:
American Cancer Society:  If your school or team wants to get involved by raising funds for a specific type of cancer, participate in your local breast cancer walk or Relay For Life, host a Coaches Versus Cancer game, join Schools Versus Cancer, or join the fight against ALL cancers in any way, please emailJessica.Hong@cancer.org.  If you have already raised funds and wish to donate to the American Cancer Society, please email Jessica and she can notify you where to mail your check or donate online. Read more.

Leukemia & Lymphoma Society:  Leukemia affects more children than any other cancer, so, The Leukemia & Lymphoma Society’s (LLS) Student Series program provides a meaningful way for kids to help kids to support the mission: Cure leukemia, lymphoma, Hodgkin's disease and myeloma, and improve the quality of life of patients and their families.  Registering is fast and easy at https://www.studentseries.org/school-registration Teachers, parents and school administrators may also call their local LLS chapter for more information. Read announcement. Contact your local chapter contact, Rachel Newcomer, at (404) 720-7804.

Blue Week For Prostate Cancer:  September 17-22 is fifth annual “Blue Week” for Prostate Cancer in the sport of Football only to alert men about “Know Your Score” with regular prostate testing checkups. Special blue decals and blue wristbands can be worn this week, and the officials will have blue penalty flags to throw. Host schools can stencil blue ribbons on the playing field for this special contest. More info TBA.
​
Georgia Breast Cancer Coalition:  The Georgia Breast Cancer Coalition Fund is a non-profit education and advocacy organization founded by breast cancer survivors. We exist to focus the attention of Georgians on the epidemic proportions of breast cancer. We work diligently to bring together individuals and organizations with a commitment to ending this devastating disease. Since 1994, GABCC has been instrumental in breast cancer education and advocacy work. We remain dedicated to making a difference for the nearly 9,000 Georgians who are diagnosed with breast cancer each year.  All of the donations, grants and funds that GABCC receives goes directly toward GEORGIA's breast cancer patients. Learn more at gabcc.org.
Proudly powered by Weebly